Peter Costello is loving the attention he's getting - well, he loves the media attention, and cannot hold back the trademark smirk whenever he's interviewed. He won't have liked the open letter from former Liberal Party leader, John Hewson. (Hewson lost the 1993 election to Paul Keating)
The letter is at http://www.theage.com.au/opinion/disloyal-lazy-no-balls-its-time-to-move-on-peter-20090221-8e6v.html?page=-1 .

Costello's real problems are:
John Hewson might well be right when he says, in his open letter:

You have only ever had a minimal support base and that base has been further
and terminally eroded by your disloyalty, antics and shenanigans of the last
year or so. ... the best you can now do to help our chances is to leave.

Deputy Leader of the Federal Liberal party, Julie Bishop, has resigned as Shadow Treasurer, and taken up the post of Shadow Minister for Foreign Affairs.

Her move came after considerable destabilizing from within. Ms Bishop had been ineffective, and made fundamental economic mistakes, as Shadow Treasurer. Joe Hockey, who has replaced her as Shadow Treasurer, is one who spoke to the media last week about the need for Ms Bishop to go. It was said publicly that she could remain as Deputy Leader if she went. Julie Bishop was shafted, because the quiet approach didn't work - it almost never does with politicians.
Ms Bishop said it was her decision to resign as Shadow Treasurer. But sometimes the decisions are made for you, by others. So, too, with her choice of portfolio - Shadow Minister for Foreign affairs: given Australia's, and the world's focus on matters economic, Ms Bishop will not have to say much.
It might well be that her tenure as Deputy Leader of the Liberal Party is shaky. A Deputy with a relatively low profile, and not much to say, probably won't be Deputy for very long.

For his part, Joe Hockey has a softer (cuddlier?) media image, presents as more personable than Ms Bishop, and has promised support from former Treasurer Peter Costello. That might make Liberal leader Malcolm Turnbull rather nervous. Costello might "groom" Hockey for a leadership spill, with either Hockey as leader & Costello as king-maker; or Costello as leader & Hockey as Deputy leader. Costello has his own concerns - the Party wants to clean out non-contributing or non-performing members from high-profile, safe, seats.
(Picture: abc.net.au)

In all these scenarios, there are plenty of undercurrents within the Federal Liberal Party.
John
Posted by The Analyst at 7:34 pm

The Australian Senate finally passed the Government's second economic stimulus package this week. It passed with the votes of the Greens, Sen. Steve Fielding (family First) and independent Senator Nick Xenophon (South Australia). All of these negotiated changes, but it was Senator Xenophon's insistance on a separate package to benefit just one state that has tarnished Australian politics.

While the government had reached agreement with the Greens and Senator Fielding earlier, Nick Xenophon held out for more - he wanted more money brought forward for the Murray River, specifically for SA. This legislation was separate to the stimulus package, but Senator Xenophon has introduced US-style bargaining to Australian politics, and done so effectively. Remember the first US stimulus package was changed by the US Senate late 2008 from a 1-page bill to a bill of over 1000 pages, with an explosion in the $-amount. That happened because the US elections were very near, and every Tom, Dick, Harry wanted something extra that would help them be re-elected.

Notwithstanding the need, and existing legislation, to improve the Murray River, Senator Nick Xenophon has brought that style of US-politics to Australia. He, and others, refused to pass the legislation on its merits, and the obvious need for an economic stimulus, unless he got what he wanted - the package to be brought forward. Senator Xenophon gets something for HIS state, and for HIS press-releases: it was pork-barrelling at its most blatant and vulgar - .

For its part, the Opposition wanted tax cuts - to benefit those who still have jobs - to drip money into the economy; whereas the IMF had supported an upfront cash injection, followed by spending on infrastructure, with already scheduled tax cuts in July. It had decided it would not support the economic package no matter what, and became irrelevant - their vote would not change.

This week has seen the current Opposition become even less relevant, and Australian politics has been compromised some Senators. Both these demean our democracy.

The Victorian firestorm has been going for a week; and its effects will be long-lasting. Saturday 7-Feb-2009 was the date tragedy sruck, and it has continued durng this week.

There are many stories and images of human angst, grief and anger. Some can be viewed at:

Those who have seen and heard the tragedy; those directly affected by the tragedy, including residents, those who lost family & friends, &/or property; those who stayed to fight the fires, police, SES, firefighters, and other volunteeers will be scarred for life - in the same way as war veterans.

The Australian Red Cross has indicated that the best way to help is to donate money to its appeal - that way money can be targeted to purchase the goods and services needed.

Currently you can donate to the Red Cross Victorian BushFire Appeal at: http://www.redcross.org.au/

A big cash injection into the economy will help to kick-start it. The infrastructure spending will be more a sustained release pill for the economy. It seems a good package, although there could be more money for unemployed people and and those on very low incomes. There are tax cuts scheduled for 1-July from last year's budget.

So much for the economic proposal. What about the politics?

Opposition Leader Malcolm Turnbull has derided the cash handouts, instead wanting tax cuts. Tax cuts have a trickle effect, and there is a real risk that some of them would be used to pay down debt, rather than be spent. The Liberal and National Coalition parties voted against the package in the lower house, and have said they will oppose it in the Senate. He might well have chosen tax cuts for a number of reasons:

For his part, Kevin Rudd has ensured that tax-payers will be reminded of the injection into schools and other infrastructure when the next election is called. Further, he can paint Turnbull as obstructionist - indeed Rudd said Mr Turnbull should "get out of the road" on multiple occasions during press conferences today.

The economic stimulus might be judged quite economically sound, but the underlying politics by the Government is very clever. 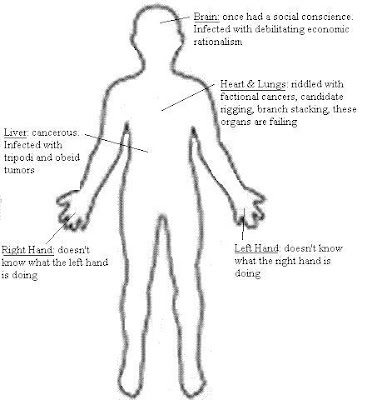