One of the better slogans I saw during the preparations for Christmas was this sign, outside a church:

"Christ - not available in stores"

Merry Christmas, and Happy New Year to all!

I will be having a few days' break to celebrate.

Email ThisBlogThis!Share to TwitterShare to FacebookShare to Pinterest
Labels: Christmas 2009

So sang Tina Turner in "We Don't Need another Hero"

We have found something today: Blessed Mary Mackillop, founder of the Sisters of St Joseph of the Sacred Heart, has had a second miracle confirmed by the Vatican. She will be confirmed as Australia's first saint sometime in 2010.

You can find more information about Mary Mackillop, and the order she founded at:
http://www.southaustralianhistory.com.au/mackillop.htm
http://www.marymackillopplace.org.au/museum/education_resources.asp
http://www.sosj.org.au/about/index.html

"We don't need another hero": politician, environmentalist, or any other. Mary Mackillop acted on her motto "Never see a need without doing something about it". She worked for the poor, the disadvantaged, the isolated. She was concerned with human dignity, not redistributing wealth to the wealthy, not avoiding taxes, not drugs and parties and "celebrities". Mary Mackillop was concerned about people, and did something about it.
What about you?? You could help with a charitable donation. Choose your favorite charity; see your local church, synagogue, mosque, temple; or checkout the following websites.

Help someone else - all you feel is good! I did.

John
Posted by The Analyst at 2:06 pm

The statement issued by world political leaders at Copenhagen is being spun as a good outcome. The only outcome is that there is, indeed, a document signed at Copenhagen. The world's leaders of developed, and developing, nations would not want to have spent as much money, time, travel, even carbon pollution to go home with nothing. So, an agreement of sorts was the most likely outcome.

The "outcome" such as it is, has been rejected by the countries most at risk, including the island of Tuvalu, as being a sellout. Almost all of Tuvalu's income comes from selling Internet Domain Names - the ones ending in ".tv"

The document
The politicians have sold out the world, their people, their children. They sold out because they had a selfish agenda: to not give what they should, to want more than they should, to pollute more for a fist full of dollars. That is their shame, and the shame of their government, and their families.

Plato viewed the world as having 2 planes: an (ideal) plane of perfection, and a plane of reality. In the ideal plane all people are virtuous, acting ethically and justly. The plane of reality is an imperfect copy of the ideal plane, and people only see occasional glimpses of good. There appears to have been not much goodness driving negotiations in Copenhagen.

Politicians have committed to meeting in Mexico next year to try to enhance the agreement. Many will doubt their ability to tighten the agreement, based on the "commitment" not shown, and selfishness that was shown, at Copenhagen.

We, the people, must contact our politicians, and tell them we want significant action on climate change, and we want binding international agreements.

John
Posted by The Analyst at 8:25 pm

Tony Abbott's plan for an alternative to an Emissions Trading Scheme (ETS) or Carbon Tax, has hit a snag - his partners in Opposition, the National Party. Together, they were instrumental in using the Senate to block, a second time, an ETS proposed by Kevin Rudd's Labor Government.

As the Liberal Party worked on an alternative to an ETS, National Party Senator Ron Boswell, has hit out at a key element - planting more trees, and granting (financial) incentives to farmers to do so.

Mr Boswell's reasoning is that farmers shouldn't plant trees, and governments should not pay them to do so. Fair enough - he wouldn't want to be socialist in his ideas of financial support for farmers ... oooh, wait a sec, yes he does. The Nat's policy is is often summarised as 'privatise profits, socialise losses'. And climate-induced long-term drought and diminishing farm viability will be socialised with government support: at least, that's the Nats' view. There is no doubt that more of our primary industries need to be restructured, particularly in the Murray-Darling Basin. John Howard, to his credit, did it for the sugar industry.

Boswell's a dinosaur, and Tony Abbott, as Leader of the Opposition, should tell him so.

John
Posted by The Analyst at 8:23 pm

Over the weekend police in all states & territories, and New Zealand, had simultaneous operations on drunkenness and violence. They particularly targeted 'hot spots', including Oxford St, Kings Cross and George St in Sydney.

From the data so far, it looks as though the publicity telling people it was happening had absolutely no effect. None. Zilch. So are we as a society, and the people concerned, so stupid that 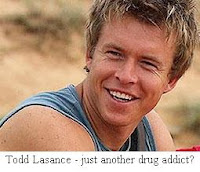 there was no change in behaviour?? Well, yes! People still went out with the purpose of getting drunk; people still carried knives & machetes, looking for a fight; people still thought they could indulge in illegal drug-taking. One TV actor, Todd Lasance, was allegedly caught with cocaine. 'Who?' you ask - well he's a person who wants to be known for his acting on the tv soapie Home and Away, wants to got to the US to further his career; and, yes, just another drug addict. Perhaps the tv show 'Stupid, Stupid Man' was written with the likes of him in mind. If convicted, the US might deny him entry.

More and more people are beginning to think the solution involves some or all of the following:

Me? I went to a party on Saturday night, had a few drinks, remained sober, and had a good time.
Those who go out to get drunk, and the premises that serve them, need to be targeted. I cannot see a reason why licenced premises need to be open beyond, say 1:30 am; or why drunks should be free to violently roam the streets. Nor can any taxi driver!

OK, I confess that all reads a bit like a weekday shock-jock, a species of which I am not fond. However, we, individually, and as a society, need to address the issue of alcohol, its irresponsible service by licenced premises, violence, and the people who go out to get druink and be violent.

At a special caucus meeting at 6pm today, the NSW Labor Party dumped its Premier, Nathan Rees, and elected Kristina Keneally with support from Joe Tripodi /Eddie Obeid's Right Faction. They had installed Nathan Rees, from the Party's Left Faction, as Premier just 14 months ago. They'd called Morris Iemma's bluff, and dumped him. Like (dumped Federal Liberal Leader) Malcolm Turnbull, Nathan Rees continued to talk. Correctly, he cited those in the Party who have weekly tried to white-ant him, and his leadership. Like the Liberal Party, the NSW Labor Party will never recover until the likes of Joe Tripodi and Eddie Obeid are gone. Bitter factional power-broking only breeds disloyalty, treachery, and, ultimately, a long time in Opposition.

The Left Faction's Carmel Tebbutt will remain as Deputy Leader.

Just like the Federal Liberal Party, the NSW Labor Party is a (rocky) horror show ...

(Joe Tripodi & Eddie Obeid, wearing black fishnets … I mean eyebrows, and cloaked in developer funds )
It's so fatuous, oh fantasy free us
So you can't see us, no not at all
In a caucus meeting, with manic intention.
Well-secluded, We see all.
With a stab in the back, You're in the Premier’s seat
And nothing can ever be the same
We’re spaced out on power, we are in control
Let's do the Labor backstab!
Let's do the Labor backstab!

(Kristina Keneally, with high-pitched, shrill voice)
Well I was walking down Macquarie Street just a-having a think
When a snake of a guy gave me an evil wink
He took me in, he took me by surprise
He had a Right Faction and developers' eyes.
He stared at me and I said ‘yes’
Ethics meant nothing, never would again
Let's do the Labor backstab!
Let's do the Labor backstab!

(with apologies to all from The Rocky Horror Picture Show)

Related article:
http://truepolitik.blogspot.com/2009/12/libs-jump-to-right-with-abbott.html
Posted by The Analyst at 8:20 pm

Libs Jump To The Right With Abbott

The Federal Liberal Party today elected former student priest, boxer and journalist Tony Abbott as its leader. At its Party meeting, a leadership spill motion was carried. (Then) Leader Malcolm Turnbull, Joe Hockey & Tony Abbott all contested the leadership. Joe Hockey, who, like Turnbull, believes in climate change, was eliminated in the first round of voting.

The party then split the vote, with Abbott winning 42 votes to 41, with 1 member absent for health reasons, and 1 deliberate informal vote. Tony Abbott then fronted the media, telling them the party is now united. (having won by just 1 vote!)

There were reports of a song & dance for the press ...

(with apologies to all from The Rocky Horror Picture Show)