Last weekend Alan Stockdale was re-elected as President of the Liberal Party of Australia, despite the 4 vice Presidents supporting Peter Reith.
Tony Abbott is reported, by Peter Reith, to have encouraged Peter Reith to run for the Presidency, but then voted against him, publicly showing his voting card to both Alan Stockdale & his Deputy, Julie Bishop. It precipitated something of a public dummy-spit by Peter Reith, who has hit the media, including radio shock-jocks with his message on IR. The message is: IR is in the Liberal Party’s DNA. He, other members of the Liberal Party executive, Tony Abbott, and Liberal MP’s all want a return to WorkChoices-style IR laws. That is: a deregulated labour market, removal of any ‘safety net’, a return to individual contracts dictated by employers.

Jeff Lawrence, Secretary of the ACTU, writing in The Australian, said:

Among Mr Reith’s suggestions for the Liberal Party is a “review” by The Institute of Public Affairs, with his people on the review panel, including Hugh Morgan, and Michael Chaney. Both are Liberal Party members, both supported WorkChoices.


Given the above information, it will come as no future surprise that the enquiry will recommend a return to WorkChoices-style IR. Peter Reith has acted as a classical politician: you can have an inquiry when you have a pre-determined result.

But the IR genie, that Tony Abbott so desperately tried to keep hidden from public view, is now out of the bottle.

Ordinary working Australians will be right to “be afraid, be very afraid”.

Abbott: “Tax Cuts are in our DNA”

Yesterday, Saturday 25-July, Ton Abbott gave his speech to the 55th Federal Council of the Liberal Party of Australia. In it he criticised the current Labor government’s lack of achievements under PM Julia Gillard in the last 12 months, & in the seven and a half months since the last election.
In proposing tax cuts, Mr Abbott said:

John
Posted by The Analyst at 5:51 pm

Tony Abbott has suggested a National Plebiscite to determine whether Australia should have a Carbon Tax.

Plebiscites and Referenda are somewhat different. In Australia, we use the term ‘Referendum’ when a question of Constitutional change is put to the people. If it passes by a majority of Australian voters, AND a majority of voters in a majority (4 –6) states, then the Government is bound to implement the change. A Plebiscite, or Advisory Referendum, has no requirement for Government action, regardless of the voting result.


Independent MP’s and Senators, the Greens, and the Labor Government have been critical of Abbott’s proposal. They have generally cited:
Independent Senator Nick Xenophon (SA) was less critical, saying the question to asked should be “neutral”, avoiding the word ‘tax’. You can almost see Tony Abbott, and his faceless advisers, wince with pain.

There have been only 3 other national plebiscites:


Tony Abbott has produced a media stunt derived purely from his own political pursuit of power. It would contribute nothing to debate about good policy: he wanted a question that effectively would have asked “Do you want to pay more tax? He did, however, admit that he would ignore the voice of the people if the vote went against him, while he would have insisted the Government follow the vote if it went against the Government! 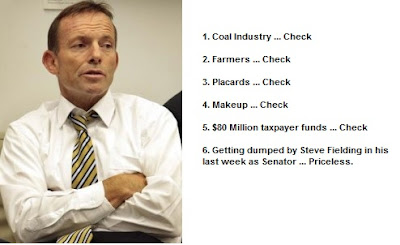 While researching for this post, I came across the following sites. The third one, about Billy Hughes, is an interesting, because he tried to use Plebiscites to change the attitudes of his own (Labor) party, and opposition Senators.

John
Posted by The Analyst at 8:38 pm

It has been a bad few days for the Federal Labor Party: its Primary vote in a poll is down to 27%; Kevin Rudd is preferred PM over Julia Gillard by 60% to 31%; Kevin Rudd had provided multiple media interviews about Thursday’s 1-year anniversary of being dumped as Prime Minister, and there are reports he will have an anniversary party to remember his “assassination”, as Prime Minister. Following the flurry of media stories, a number of Labor people have anonymously suggested he should be sacked as Minister for Foreign affairs & Trade.
Kevin Rudd has been accused of being arrogant, and a bully. Tony Abbott has accused Julia Gillard of being arrogant. Tony Abbott is arrogant and a bully; and so was  John Howard. Many leaders, as with many elite sports people, have an arrogant, confident streak in them. However, it would have been in his party’s interests had Kevin Rudd declined all interviews about the events of June 2010, despite media interest. It is certainly not in his party’s interest for him to hold an anniversary of assassination party.
Tony Abbott continues to effectively cause the government grief. His relentless use (misuse?) of the media for negativism has resulted in a significant rise in his, and the Coalition’s preference. The Labor Government’s problems include:

While these are not all the problems facing the Federal Labor Government, they are significant. Members of Julia Gillard’s Government need to display much more discipline, and loyalty to the party. Any chance at good government requires it, and less effort on internal factional business. Tony Abbott is running a small target campaign, with very little policy. It is a tactic that was very successful for Barry O’Farrell in NSW, and he has unleashed a right-wing attack early in his term. Public Servants and the IRC have been the main targets.They also need to work towards solving all of the above problems, else the right faction will lead Labor to defeat at the next election, even though Julia Gillard is from the left faction.

John
Posted by The Analyst at 5:04 pm

In Search of a Moral Compass 2

If you read my previous post at: http://truepolitik.blogspot.com/2011/06/in-search-of-moral-compass.html, you should also see the excellent treatment on The Political Sword.

John
Posted by The Analyst at 5:06 pm

In Search of a Moral Compass

The Current Events
Andrew Wilkie, MP, accused Labor of losing its moral compass on live exports (of cattle, in particular) and in its treatment of refugees.

The public backlash after 4-Corners graphic video report on the slaughter of cattle forced the government to impose a 6-month ban on live export of cattle to Indonesia. Joe Ludwig,  Minister for Agriculture, Fisheries and Forestry, had his hands full managing the new stories about the mistreatment of Australian cattle in some Indonesian abattoirs, and responses from the National Party, and cattle graziers from northern Australia. They depend heavily on live exports. He has not responded to the comments about Labor’s loss of its moral compass, but did respond to the 4-Corners report with a statement that read, in part,


"I asked industry at the beginning of this year for proposals on how welfare outcomes could be improved, particularly after animals arrive in importing countries. I am currently considering these proposals.” Mr Ludwig’s full statement can be read at http://www.abc.net.au/4corners/special_eds/20110530/cattle/docs/statement_ludwig.pdf

If true, this might go some way to answering Andrew Wilkie’s assertion about Labor’s moral compass. However, reports can take an indeterminate amount of time to consider, once in government hands, and the test will be how quickly Mr Ludwig responds, and in what manner.

Immigration Minister, Chris Bowen, was quicker to respond to the assertion that Labor had lost its moral compass. He told The Age


''everyone has got their own moral compass … the government's moral compass is driven by trying to avoid the risk of [people] getting on boats, and to increase our humanitarian intake''.
http://www.theage.com.au/national/malaysian-deal-critics-slammed-20110606-1fpb5.html#ixzz1P3mawXfl

So, exactly what is a “moral compass”?

The terms ‘morals’ and ‘ethics are often used interchangeably. They are somewhat different.
Morals represent the shared beliefs of a group or society about what is 'true’ or right in behavioural terms. Morals are not the exclusive domain of religions, or religious groups. Different societies have different moral codes, sometimes at odds with religious groups within their society.

Ethics refers to a study of what is right & wrong; and how that determines our actions. Some things are deemed to be absolutely right or wrong. For example, murder, rape and child abuse are seen as absolutely wrong. However, in many cases, what is ethical behaviour is much more difficult to determine. Ethical behaviours are commonly written as “professional standards”.

However, what is ethical, need not be moral, and neither might be legal. Extreme legislation such as that allowing slavery, or apartheid, made such actions legal, but almost everyone would say they were neither moral, nor ethical.

The Centre for Defined Ethics says that


“a Moral Compass promotes the intellectual idea of a moral vision that's based on a worldcentric vision and the necessity for care towards each other.” http://www.themoralcompass.co.uk/case.htm

Do Governments & Political Parties Have a ‘Moral Compass’?

If they did, I suggest they have lost it.
Federally:
Members of the ALP’s right-wing factions have said privately to journalists that if they don’t effectively demonise boat people, and send them to long-term detention, or off-shore, they believe they will not win the next election. Our society’s ‘morals’ are that these people do not deserve to be treated humanely, because they arrived by boat, and used people-smugglers to get here. Voters’ morals & ethics are not based on ethics requiring “the necessity for care towards each other”. Labor’s policy is based on matching, or being even harsher than, the Liberal-National Parties’ policy. The policy of both Labor and Liberal-National parties is based on what will get us elected. John Howard’s successful strategy was to demonise refugees, and it changed our society’s morals. Those morals have been reflected in the treatment of other refugees, such as those granted asylum after working for, and helping, Australian troops in Afghanistan. They have reportedly been vilified and subject to racial abuse in Queensland and Victoria. Labor’s policy on those asylum-seekers that arrive by boats is based on political expediency, and the desire to be re-elected, not on any moral compass.

The Liberal-National Parties’ policy contributions, in Opposition, are confined to: ‘No’; and a burning, and largely unstated desire to return to the extremism called Howardism: demonising all asylum seekers; personal wealth at the expense of societal wealth; redistribution of wealth to those with more, and to private companies; and with IR controls in the hands of politicians and big business, not courts.

In NSW:
The previous Labor government passed the so-called Part 3A Planning legislation. It allowed the Minister for Planning to arbitrarily introduce regulations, over-riding local planning laws; environmental and heritage laws; and  put a straitjacket on the courts. It allowed approval of for example, the approval of a car park at the Barangaroo site without the developer having to clean contaminated soil; it allowed the approval of coal-seam gas extraction on farmland. There appears to be not much influence of a moral compass there.

The current Liberal-National government in NSW proposes to introduce IR legislation that will straitjacket the IR court. Like the Part 3A Planning laws, a Minister will determine what judgement the court will make. It is motivated by a right-wing desire to attack public-sector unions. That is, it is based on political extremism. There appears to be not much influence of a moral compass there.

Our political parties are not guided by any moral compass. They are guided by ‘spin doctors’ and party power-brokers whose only desire to gain political power, and to keep it. 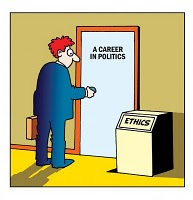