As we prepare for Christmas with family: children, parents, brothers, sisters, cousins, in-laws; and/or friends and strangers, it is good to reflect on the reason for Christmas.

For Christians, it is a celebration of the birth of Jesus Christ; a time to remember the messages of hope, redemption, peace, love and generosity of spirit.

For a secular society, it is a time of hope, for wishes of peace, love, family, and generosity.

The messages are remarkably similar.

Merry Christmas to everyone.

For a modern, digital, take on the story of the nativity, see:
http://www.youtube.com/watch?v=GkHNNPM7pJA

Email ThisBlogThis!Share to TwitterShare to FacebookShare to Pinterest
Labels: Christmas 2010

The NSW Premier, Kristina Keneally, has effectively sidestepped democracy. The NSW Governor, Marie Bashir, has prorogued (suspended) Parliament at the Premier’s request. It was not scheduled to be prorogued till late February. Writs for the election are scheduled for about the 4th March, 2011. The NSW Parliament will not now sit until April 2011, after the election. However, because the government is not in caretaker mode , the Premier is still free to make major policy announcements.

The move means that any meetings and deliberations by a Legislative Council inquiry, from today, are unlikely to be recognised. The inquiry was to examine the sale, the involvement of individuals and possibly the legality/ethics of the sale. By suspending Parliament two months early, Premier Keneally and others hope to avoid official public and Parliamentary scrutiny of their actions.

Following are some of the facts that are known:
Speaking to the ABC about the 11 directors who resigned, Roozendaal said “They were not looking at the public policy objectives of the government. They were not looking at the benefits to the taxpayers; they were looking narrowly at what they believed was interpreting the responsibilities for their organisations." But aren’t company directors supposed to act in the interests of the company, and shareholders?
ASIC sets out the duties of directors thus:
Given the above, especially point 6, there might well be serious questions asked of the directors so hastily appointed by Eric Roozendaal, whose only task, it seems, was to act in the political interests of the Treasurer, and Treasury.

The Legislative Council inquiry, so swiftly sidestepped by Premier Keneally, might well be the public inquiry we need to have.

For two of the last three weeks, Australians welcomed, gushed and had periods of personal hysteria during the “Oprah Winfrey’s Ultimate Australian Holiday”. She was gracious, generous, almost gushing in her praise of Australia, and Australians. Journalists, and media outlets, covered the minutiae of her movements. I heard one journalist say words similar to ‘We believe Oprah is in her car. Oh, my God’.  It was, after all, a promotional tour organised by Tourism Australia. She appears to be a nice lady, well-known, wealthy, and we welcomed her with open arms. We spent considerable amounts of money to pay for her tour, including adding a big “O” to the Sydney Harbour Bridge.

Contrasting this, was the most terrible crash of a boat-load of asylum-seekers on Christmas Island, on Wednesday. Boat arrivals, and the treatment of asylum-seekers have been the subject of UNHCR criticism. Under former (Liberal) PM, John Howard, the UN was critical of the harsh regimes in detention centres, especially Baxter Detention Centre in central Australia, and of the ‘off-shore’ processing centre at Nauru. (Labor) PM Kevin Rudd, and now Julia Gillard, have been criticised for the length of time it takes to repatriate people whose asylum claims have been denied. 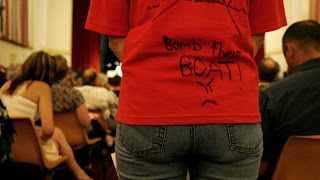 The photo at right shows a woman’s t-shirt that says “bomb the boat” at a community meeting in Northam, WA in November. I do hope she’s not gloating at the loss of 30 or more men, women and children on Wednesday 15-Dec-10 when the boat sank at Christmas Island. Similar meetings and sentiments have been held in the Adelaide Hills, SA.

Australia should not have an open-border policy. But there are people in Australia, and elsewhere, who want to take the ‘Christ’ out of Christmas. Our politicians, of all sides, have led the race to the lowest point, in the quest for a vote, as they try to buy the votes of xenophobic and racist voters. That is our shame, and theirs.

John
Posted by The Analyst at 1:41 pm

Swan Parries at The Banks

Treasurer Wayne Swan has announced measures to increase competition in the banking sector. In Australia, the big banks -  Commonwealth, National Australia Bank, Westpac/St George and ANZ – hold most of the market. They also effectively own a number of second-tier banks and mortgage providers. For example the Commonwealth Bank own Bank West, Wizard Home Loans and has a 33% stake in Aussie (Home Loans)

The banks act a a classic economic oligopoly. The mortgage market is effectively controlled by only a few large corporations. They have increased interest rates on loans above the increases announced by the Reserve Bank, are largely unaffected by political “pressure” statements of the current (Labor) government, and the previous (Liberal-National Coalition) government. They have not increased rates on their savings accounts, and have reduced the rates on some term deposits in the second half of 2010.

The measures announced by Mr Swan include:

The announcement was orchestrated as a full press conference, with the Treasurer, Assistant Treasurer & Minister for Financial Services & Superannuation, Bill Shorten, and the Treasurer’s Parliamentary Secretary to the Treasurer, David Bradbury. It was, by any measure, a media “event”, designed to maximise publicity about taking on the banks, and improve the government’s approval rating. Former (Liberal) Treasurer, Peter Costello used to put on such shows, at which he also revelled in his displays of sharp wit.

It remains to be seen whether the Liberal-National Opposition will support the legislation, designed to increase competition, and give more power to consumers, or support the big banks in their opposition to competition. The history of the Liberal-National opposition since losing government in 2007, and the 2010 election, has been to support big business and oppose, or obstruct, most legislation introduced to Parliament by the government. I suspect it will try its best to obstruct and delay as much as it can.

I Love A Sunburnt Country

The following is the 2nd verse of a 6-verse poem called 'My Country'. It was written by Dorothea Mackellar

I love a sunburnt country,
A land of sweeping plains,
Of ragged mountain ranges,
Of droughts and flooding rains.
I love her far horizons,
I love her jewel-sea,
Her beauty and her terror -
The wide brown land for me!

It is the best-known verse of this poem, a poem that spends 5 of its 6 verses professing the author's love for different aspects of Australia. Following are some images that I hope reflect some aspects of that amazing verse.

In December 2010, many parts of the plains of NSW are experiencing flooding, with every west-flowing river between the Namoi R. in the north to the Murrumbidgee R. in the south having flood warnings. Some people will be lucky to be allowed home in time for Christmas, let alone have a habitable house.

If you're in Australia, please consider a gift to a charity that will help people at Christmas. Try The Smith Family, St Vincent de Paul, The Salvation Army as a start.

I love a sunburnt country ... but geez, she can be hard on us.
John