Today’s news carries the suggestion that NSW Premier, Kristina Keneally, that she believes we should have a public discussion about raising the drinking age in NSW to 21. It is currently 18, has been since the early 1900’s.

So, should the state, or Australia as a nation, raise the drinking age to 21?

There are more arguments if you want to do an Internet search.

Other Considerations that might affect the rate of alcohol abuse & related violence, and which we should also discuss in public forums:

I do hope our politicians

At a community forum in Brisbane on 10-November, Opposition Leader Tony Abbott said that if courts continue to give “lenient sentences” then Australia will probably move to a system of elected judges. Judges are elected in the US, for example. He indicated that too many judges are handing down sentences that do not reflect community anger at the crime.

I don’t know about you, but I had alarm bells ringing in my head, as follows:

Mr Ian Gray, Chief Magistrate of Victoria, in a presentation to the Sentencing Conference (February 2008) addressed the issue of “Sentencing in Magistrates’ and Local Courts in Australia” to the National Judicial College of Australia.

In it, he presents arguments:

It is these last two points that really are the telling points against Tony Abbott’s suggestion. It would be best if politicians, and governments of all persuasions argued against a suggestion that might well have been driven by political opportunism and populism.

You can read the full text of Chief Magistrate Ian Gray’s presentation at:

As Stephen Conroy defends the National Broadband Network (NBN) from criticism by an OECD report, there are also other things to consider.
The OECD has criticised a number of policies. The Federal Opposition is beating its slogan drum, and both sides of politics have much to work on.

The policies comments on Australia by the OECD include:
Meanwhile Tony Abbott has been spruiking his "stop the boats" slogan in Parliament. He does this knowing that he doesn't have to. Indeed, he doesn't even have to have a policy - just a slogan. Meanwhile the UN has expressed its concern about "off-shore processing", including Labor's Timor solution, and the Coalition's "Pacific Solution" on Nauru.

The fact is that many of the OECD's criticisms, but not all, stem from the fact that our politicians, and their parties, do not, and will not, determine good public policy and run with it. They simply spend too much time palying politics, and paying 'media advisers' with taxpayers' money.

It’s been more than a week since Canberra Raiders Rugby League player,Joel Monaghan, fronted the media to resign from the club as a player. The NRL had also been reported as considering deregistering him as a player.
The images of alleged bestiality with a dog that had been released onto the Internet and reported in the media had finished his career. Much was written about the alleged bestiality, and that it was a drunken prank that occurred as part of ‘Mad Monday” – annual binge-drinking events tolerated by Clubs, and the NRL.
The NRL, QLD, NSW and Australian representative teams, and Brisbane and Newcastle RL clubs are sponsored by beer companies. These entities have a vested interest in not reducing the alcohol consumption of players, nor of the public who go to see the sponsors’ ads … err ..game.
An acquaintance talked about the “the devil” in the drink, and the actions of players who were present, and did nothing, and of those who took and publicised the photo, or photos. I agreed that it  was certainly unethical and morally wrong for Monaghan’s “mates” to stand around watching the alleged act, but doing nothing, and to take and release photos. In its derivation “devil” comes from ancient Greek (& later, Latin) words which mean “accuser” & “slanderer”.
Joel Monaghan, and other sports professionals who have suffered public embarrassment or humiliation, has paid a very public price for his binge-drinking and alcohol-induced stupidity. But there are devils within his team, and his group of “mates”. They are culpable because they did NOTHING to stop actions they knew to be wrong; took photos of it; and now remain anonymous. Those reactions are, truly, “devilish”. For its part, Canberra Raiders club has said it would not try to identify the player who leaked the photo. They are happy to retain the “devil” and do nothing about him.

Canberra Raiders and the anonymous “devils” they are protecting demean the player, his family, the NRL, and our society. They are allowing anonymous people involved in the incident to get away with no consequences, no responsibility.
John
Posted by The Analyst at 1:49 pm

Today's news carried a story about the websites of politicians using cookies, including so-called 3rd party cookies to track the web movements of visitors.

Most politicians have websites. The politicians named include: NSW Premier Kristina Keneally (Labor); NSW Opposition Leader Barry O'Farrell (Liberal), Federal Opposition Leader Tony Abbott (Liberal), and teh website of The Greens. All the websites reportedly placed 3rd party cookies. ie cookies from anther website not related to theirs. None of the websites indicated they used them. Some of the cookies were Adobe Flash cookies: these are NOT deleted when you use the "delete cookies" setting in your browser.

More worryingly, these politicians, from all parts of the spectrum, are, I believe, unethical in their use of such tracking cookies because they do not inform visitors to their site that they use them, and do not offer an option to turn them off. They will not be alone in that: many companies, including the target-de-joeur banks, use flash animation in their sites. Personally, I've never much liked Flash: it is more likely than other software to crash any of my browsers, and their cookies seem largely aimed at generating business income, and not user  convenience.

At the macrommedia site (link above), work through each of the Settings Manager links on the LHS. (see below) 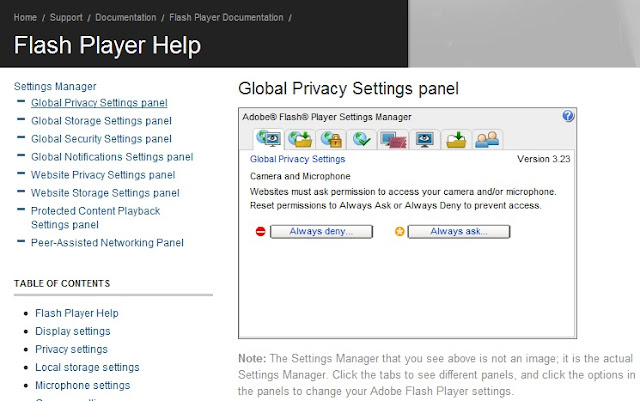 Cut the politicians, corporations, and others that want to track you. If they collect enough data about you, it could be used to identify you!

John
Posted by The Analyst at 9:10 pm

Do they? Last weekend, Federal Liberal MP, Dr Mal Washer, said that the longer working hours for current MP's and Senators are "unsustainable". The argument is that the tight numbers in the House of Representatives mean that MP's have to be available to rush to the House if required by their Party.

Previously a number of MP's from either side of politics could mostly absent themselves from the House or Senate without any great consequence. there was also a "pairing" arrangement, which meant that if a member were absent on Parliamentary or government business, a member of the other side would either absent themselves, or abstain from voting. (Liberal) Opposition Leader tony Abbott refused this practice as a routine matter, and has only decided on a "case-by-case basis". this increases the uncertainty, and the requirement for members to at least attend Parliament House.

The second thing that has increased over the last 10 years is the amount of time politicians spend on "party-political" duties. That is, using work time, and taxpayer-funded advisers, to perform work for their political party.

Thirdly, the time spent on seeking advice about, preparing, rehearsing, and finally presenting the 3/5/10 second media grab has increased exponentially. These mostly consist of untested political assertions, short slogans (remember, I discussed 'sloganeering' during the recent election) designed to get attention, but contribute nothing to any debate on issues. While there is undoubted pressure from sections of the media for a media grab, politicians are not bound by duty to be media tarts. And rather too many of them are. 'The media' is seen as something to be managed, to be used for party political advantage, and for self-promotion. Too often whether a story will look good in local news, News Ltd papers, Sky News, or other media is more important than working towards good policy and contributing to sensible, rational debate.

I don't doubt that politicians work long hours. I just question how many of all the hours, and taxpayer dollars, are spent on the job we employ them to do, and how many are spent on party work, and self-promotional work. I do think that, if the thoughts of Dr Mal Washer are valid, politicians need to restructure their work, to focus on their work as representatives (of either voters, or states), and to have better defined times when they are available to the media.

John
Posted by The Analyst at 8:31 pm