Tony Abbott has sent an email to Liberal Party supporters, at the end of which he asks for a donation to fight the (proposed) flood levy. It will really be a short-term addition to the rate of Medicare Levy. Both sides are playing politics with this. 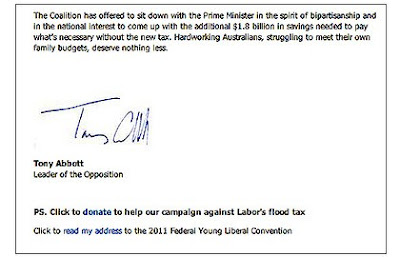 The email bears Tony Abbott's signature, and will have been approved by him, but would have been sent by a political staffer.
Notwithstanding the words of the email, Tony Abbott has no bipartisan cooperation in mind, and has, indeed, been pressuring the Independent MP's to support him and bring down the government.
The post script plea for donations to campaign against flood levy is rather tacky in its implication. That is, that there should be no levy, and perhaps that taxpayers should be more self-centred and contribute less to society. It is Liberal Party philosophy that "user pays" ... unless there is political capital to be made for them.
Abbott's plea seems to be backfiring. It seems that some older members/supporters of the Liberal Party actually think using an income tax levy to rebuild infrastructure is entirely appropriate, and Tony Abbott risks alienating not only Liberal supporters who hold such beliefs, but many Queenslanders, too. Queensland is a state vital to both parties' electoral success.
For its part, members of the current Labor government have hit the media with criticism of the email, again for purely to score political points. Abbott tried to laugh it off, saying he believes Labor emails also solicit donations. But it's what he doesn't say that's important here - that Labor has not asked for donations to fund ads opposing a mechanism to rebuild infrastructure after a natural disaster. It was just tacky and rather cheap politics by Tony Abbott & the Liberal Party. So is the "point-scoring" by Labor.
John
Posted by The Analyst at 8:19 pm