The debate about whether Australia should, or should not, have a carbon tax is being hijacked. Today in Sydney there were two rallies: one in favour of a carbon tax, and one opposed to any carbon price.

The anti-tax rally, apparently organized by on Luke Jenkins, boasted the support of 22 organizations. All were pro-conservative media (The Australian, The Daily Telegraph); conservative-media journalists (Andrew Bolt - he of the current controversy concerning his comments about some aboriginal people); political organizations (Menzies House); Jo Nova (she has links to the Heartland Institute, which worked with tobacco giant Philip Morris to try to discredit second-hand smoke as a danger to health); One Nation; ... There website is: http://www.nocarbontax.com.au/ I don't doubt that there are extremists associated with, and driving, the organization. They play on one basic human trait: we don't like paying any tax.

Rallies are organized, and the Liberal and National Party politicians invited. It is as if the no-tax power-brokers are waving the tails of the Coalition politicians! Some of them are willing subjects, for their own political purposes.

The pro-tax, pro-climate change rally was organized by GetUp! - http://www.getup.org.au/ - an organization also known to contain some extremists, and willing to criticise all and sundry that don't meet their "social" wishes, including the Labor Party. Like the No carbon Tax group, they attempt to wag the tail of politicians and political parties.

Both rallies are reported to have had about 4000 participants. 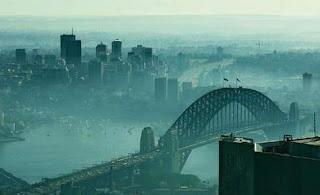 
"... industrial activity is responsible for the rapidly increasing levels of atmospheric carbon dioxide and other greenhouse gases. It is not surprising then that global warming can be linked directly to the observed increase in atmospheric carbon dioxide and to human industrial activity in general."  http://www.nasa.gov/topics/earth/features/co2-temperature.html

Yes - a carbon tax would work better in a closed economy. That is, one not exposed to, and part of, world-wide economic activity. Taxes, like interest rate movements from The Reserve Bank are designed to change people's behaviour. A carbon tax will help change people's behaviour in their use of carbon-based energy: mostly electricity and petrol. This is because society needs an impulse to change its behaviour, and if people want to not pay the tax, they will change their behaviour.

A price on carbon is appropriate, the pollution has an economic cost that polluters have not had to pay, and economics says that they should.