Fred Nile, speaking while introducing a Bill to remove ethics classes in the Legislative Council on 5-August, said:


''It's relative ethics, which is the basis of secular humanism,'' Mr Nile told parliament. ''I believe this is the philosophy that we saw during World War II with the Nazis and with the Communists.'' 1

He also asked a Question Without Notice to the Hon. Duncan Gay, representing the Minister for Education in the Legislative Council.2 The purpose of the question is to try to undermine ethics classes, which only began in Term 1, 2011. Information about the program can found at
Wikipedia 3 differentiates relative and absolute Ethics in the following terms:

In terms of Rev. Fred Nile’s criticism of relative ethics, and his desire for absolute, God-commanded, morals/ethics, consider the following situation as told by Norman Anderson, and published on biblicalstudies.org.uk 4  (pp32-33):


“Imagine that I was standing on a lonely heath, where a single path divided into two―the one branch winding down into a wood and the other running up over a hill―when suddenly a little girl ran along and took the path into the wood, followed, some two minutes later, by a man with wild eyes who demanded to know which path she had taken. What should I do in such a situation? The ideal solution, perhaps, would be to take him home for a cup of tea or coffee; but he might not accept the invitation! The next best thing might be to engage him in conversation until he became calm and rational and the little girl had had plenty of time to get away. But suppose neither of these alternatives seemed feasible. In such circumstances I should myself unhesitatingly point to the path up the hill and tell him that she had gone that way―knowing perfectly well that I was telling him a downright lie. I hope, moreover, that I would realise that to tell lies is to go against a principle of abiding moral validity, and that it is intrinsically evil.” 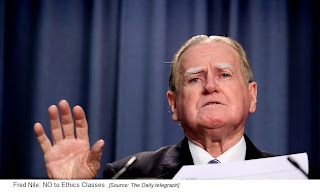 Fred Nile would, guided by his absolute ethics/morals, be bound to tell the truth, almost certainly to the young girl’s peril. But he would have been ‘absolutely moral’ in telling the truth!  Of course, the most moral & the most ethical action is to lie, in order to ensure the girl’s safety, but this relies on Relative Ethics.  Rev Nile’s argument that relative ethics is the same as the philosophy used by the Nazis and Communism is nonsense, and unchristian in its proposed treatment of other people, in particular the students and parents. It is worth noting, too, that Rev Nile is bound by a Parliamentary Code of Conduct 5,  based on … relative ethics! I’m not sure how he feels about that.

As a Catholic, I'm offended by Fred Nile's stance on Ethics, by his attempt to impose a theocratic rules on secular, public education, and by his unchristian treatment of the people of NSW.

You can read more about the NSW Public School School Ethics Program at www.primaryethics.com.au  and http://parents4ethics.org
In preparing this post, I looked at:

John
Posted by The Analyst at 3:09 pm